Etienne Lemaitre is the ideal 20th century gentleman. He is anti-racist humanitarian decent, and generous. His heart is filled with compassion for the weak and the poor. After a 4-year stay in Iran, he comes back a fervent Islamophile feeling nothing but contempt for the West and its first-world arrogance. A series of events begin to unfold when Etienne’s devoutly Christian sister survives a serious car accident. She takes her son to a pilgrimage of gratitude to the Holy City of Jerusalem. Etienne’s nephew dies in a terror attack. Etienne is drawn into a strange new world that clashes with his certainties; sometimes dangerous and always puzzling. In visiting his sister and trying to understand his nephew’s senseless death he encounters complex people and events all surrounded by a cloak of mystery. Does the psychiatrist who treats his sister have a hidden agenda? Is the caring nurse scatterbrained? Events seem to conspire that subvert Etienne’s sense of reality and make him at times question his own sanity. This is a novel of intrigue and fiction: the characters are fictional, but they live against a background of true places, events and historical facts in a complex Middle East.
As we follow Etienne in his eyes-opening journey our own values and vision of the modern Middle East are challenged. 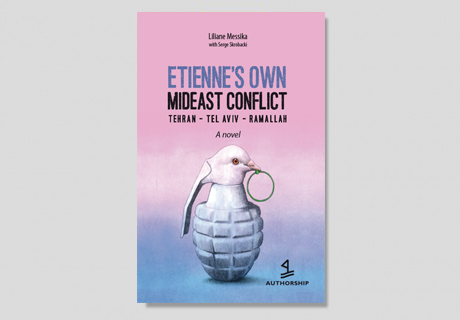